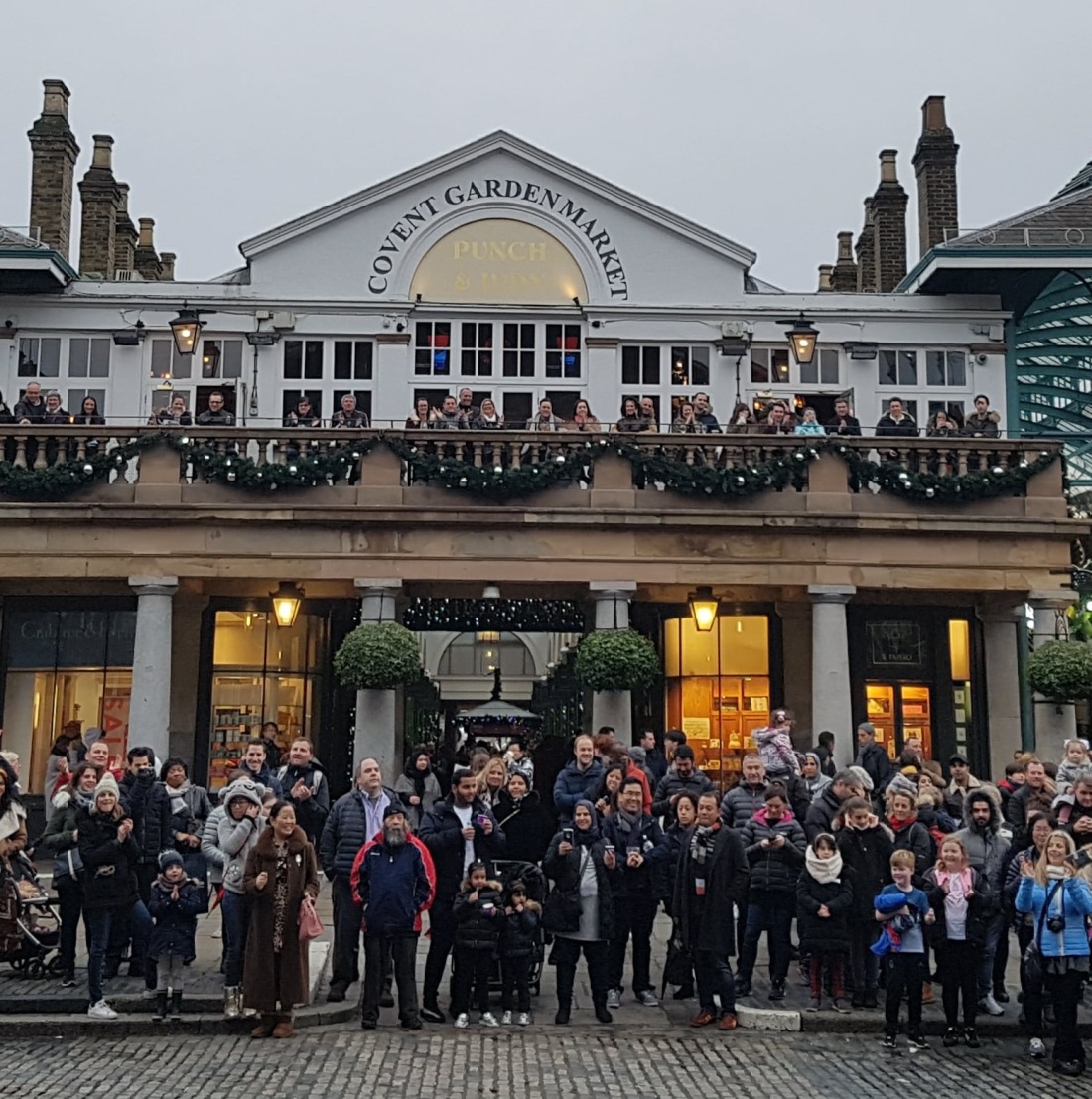 This past week I’ve been back in the UK visiting clients of Pirates. In 4 days we’ve been to Manchester, Leeds, Birmingham, Coventry and London. At the moment despite the fears of Brexit and the loss of Thomas Cook all the people we spoke to seem to be hopeful that 2020 will be a good year for tourism in Mallorca. Put it this way we visited clients that brought in over 750,000 people to the island this past year and are all looking to increase next year. You won’t be surprised to hear that the weather was cold, grey and wet. My test for realising Mallorca was a great choice to live is always to go on the tube in rush hour. Whilst it’s a great way to get around London rush hour is horrendous and I promise I’ll never moan about the traffic on the Via Cintura again. London, my home town was looking very christmassy and another must do is a beer in the Punch & Judy pub in Covent Garden watching the street entertainers. All in all a good few days but good to be home.
Less than a month to Christmas and we’ve begun to play festive tunes on the radio. Every year around this time we always seem to get a warning about a brussell sprout shortage. Sure enough The British Growers Association say they could be off the Christmas lunch menu this year due to a shortage of the vegetable grown in the UK.
Wet weather is being blamed as it’s making the harvesting of crops ‘very difficult’ and cauliflowers and cabbages are also being effected.
If the wet weather continues and the vegetables, part of the brassica family, cannot be saved, they may have to be shipped in from overseas. So no shortage then really.
A non-league match has got a spot-kick in history, for equalling English footy’s longest penalty shoot-out. Taunton Town and Truro City needed 34 kicks to settle their Southern League Challenge Cup tie.
After finishing normal time at 2-2 and extra-time at 3-3, the shoot-out ended 12-11 to Taunton with midfielder Jack Rice netting the winner.
The Somerset club’s chairman and groundsman Kevin Sturmey said: “It was mad, 34 minutes, 34 penalties and then I had to rebuild the penalty spot afterwards.
“We had two opportunities to win it on penalties 32 and 33 and missed both chances, one would have been signalled a wide at cricket.”
The shoot-out at Taunton’s Cygnet Health Care Stadium equals the English record set in 2016 when Chelsea’s under-23s beat Oxford United 13-12 after 34 kicks in the EFL Trophy.
But it falls well short of the world record for a penalty shoot-out.
That was set in 2005 when KK Palace beat Civics 17-16 after 48 penalties in the Namibian Cup.
Atlético Baleares lost only their second game of the season with a 1-0 reverse against Getafe B. A slight wobble after their amazing start and the gap between them and second placed Atlético Madrid B has narrowed a little to just 3 points. Hopefully they’ll get back to winning ways this weekend as they entertain Celta B at the Estadio Balear. You can buy tickets on their website.
No game last week for my youngest Jude but Jacobs team were up against the top of the league Es Raval from Santa Catalina. After winning their opening 8 games and scoring 88 goals we weren’t sure how we were going to do. But only losing 1 in 8 the boys were confident they could give them a game. After going 1-0 down in the first 5 minutes it wasn’t looking good. But slowly we started to get into the game and we were unlucky not to equalise on at least 2 occasions before half time. The confidence was high going into the second half and it was obvious that we were the first team to give them a game this season. We continued to put them under pressure and all we lacked was a goal. All that enthusiasm vanished when our defence decided to gift then a second goal. This new rule of a player being able to take the ball from the goalkeeper inside the area has caused lots of team’s problems this season, even my team Arsenal can’t seem to manage it. So our centre half got the ball and under pressure from the centre forward lost it and he scored. Two-nil down there was no way back, the boys heads went down and they went on to lose 4-0. So it wasn’t a gubbing like they’ve done to every other team but disappointing that we gifted them the game after being in it for so long. A week off for Jake this week, with Jude back in action on Saturday.
We’re then off to watch Real Mallorca who play Betis on Saturday evening. So bad is their away form they need to keep up their good home form. My Wife is away for the weekend so a trip to our favourite Can Pedro after the game could well be on the cards. Saves on the washing up!
Enjoy your weekend!
Richie presents the Radio One Mallorca Breakfast show Monday to Friday07.30-11.00am on 93.8fm in Mallorca and 102fm in Calvià, online at www.radioonemallorca.com on mobile through their free App for IPhone & Android, The Tunein Radio App, iTunes, the Spanish TDT TV service and all smart speakers. If you can’t hear him on the radio then you’ll find him working at Pirates Adventure the islands number one night out and every now and again he may make an understudy appearance!
Follow him on Twitter @DadTaxi1 & Instagram @dad.taxi or feel free to email him at rprior@globobalear.com

I've lived and worked in Mallorca since 1990. I've worked at Pirates Adventure since 1994 and set up Radio One Mallorca in 2009. This blog will give you my news, views and my life on our island in the sun. View all posts by somethingforyourmallorcaweekend

Morning from the sunshine isle! #mallorca #majorca #stormgloria
Morning from the Sunshine Isle! #mallorca #majorca #radio #breakfast with @deepblueseatraining #live&local
Happy New Year to all our listeners around the World! #mallorca #happynewyear
With our friends @legendsvip we’re offering you the chance to see @lionelrichie Book your tickets now for the Lionel Richie concert in Palma, on July 29th 2020. All the entries will be put into a draw and the organisers will draw 5 lucky winners on December 26th, who will receive: - a bottle of his & hers brand new Lionel Richie „Hello“ Eau de Parfum - 1 guest invitation from the promoter Don‘t miss your chance and get your tickets now at www.legendsvip.com #mallorca #lionelrichie
@rcdmallorcaoficial get their first away point in @laliga #realmallorca #rcdmallorca #mallorca #futbol #football #viscamallorca
Jump Around! #houseofpain #hiphop #mallorca